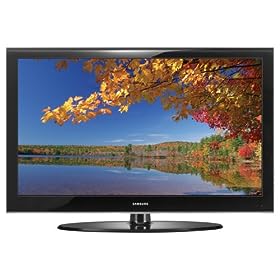 So I’ve been busy moving into a new apartment, and setting stuff up.  I just purchased the Samsung LN46A550, after searching the reviews on Amazon. It is easily the best television I have ever owned, and I’ve only had it a few days.

I have comcast digital cable, specifically the digital classic package, along with the high definition package.  We have been watching on my girlfriends 13 inch television for about a week, and I had seen enough…I needed my high definition television.

The digital channels (or standard definition) are good, and definitely watchable.  But the high definition channels blow you out of this world.  They are so good, and look lifelike.  I watched the Red Sox game the other day, and it was phenomenal.  I also have an xbox360 hooked up, and it is amazing playing Call of Duty 4.  Absolutely amazing picture.

One of the bad aspects of this television set is the sound.  The speakers are cheap sounding.  I fixed this by hooking it up to a Sony HT-CT100 Surround Sound system (I will be reviewing this shortly).  Now everything sounds amazing with the simulated surround sound.

Overall, I have to give this Television 5 stars.  Those with enough money for the set will be able to afford a nice speaker system. Go buy it directly from Amazon below!